Central & Eastern European insolvencies: The good times are over

The Central and Eastern European region (CEE) has been enjoying improved economic activity in recent years. This was particularly noticeable in 2017, when the region’s average GDP growth soared to 4.5% - the highest rate since 2008. Household consumption and inputs from rebounding fixed asset investments made significant contributions to growth. Nevertheless, the favourable business environment in 2017 was not sufficient to drive an improvement in companies’ liquidity situations.

The overall number of insolvencies increased by +6.4% in 2017, which means a reversal of the trend shown in recent years, where there was a drop of -6% in 2016, following a fall of -14% in 2015. Another change was the fact that in 2017 more countries were affected by an increase in insolvencies. During the year, nine countries reported a higher volume of insolvencies (Croatia, Estonia, Hungary, Lithuania, Poland, Romania, Russia, Serbia, and Slovenia), whereas only five countries recorded a decrease (Bulgaria, Czech Republic, Latvia, Slovakia, and Ukraine). 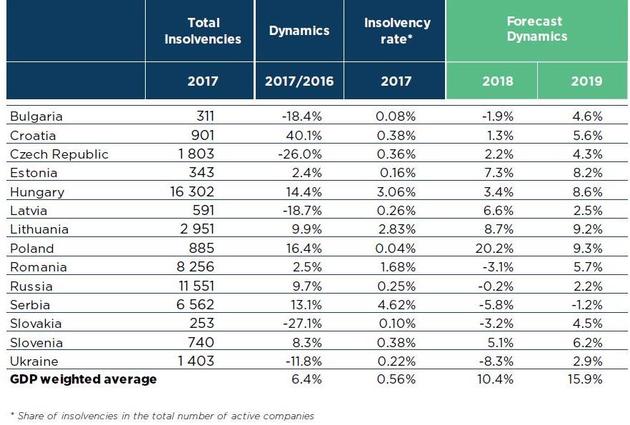 The regional breakdown reveals a wide variety of dynamics, ranging from a -27.1% decrease in insolvencies in Slovakia and a drop of - 26% in Czech Republic, to slight increases of +2.4% in Estonia and +2.5% in Romania and even a surge of +40.1% in Croatia. The countries shared some common reasons for the deteriorating business liquidity that has led, in some cases, to insolvencies.“High capacity utilisation and solid demand encouraged companies to expand their capacities”explains Grzegorz Sielewicz, Regional Economist Coface Central & Eastern Europe. “In addition to this, positive periods in the economy motivated new businesses to set up, despite the high level of competition prevailing in a number of sectors.Companies frequently experienced increases in turnover, but lesser increases in profits. Profits were constrained by rising costs, including wage growth and the higher costs of inputs - as confirmed in accelerating producer price indexes.”

Furthermore, difficulty in filling job vacancies became a major obstacle for businesses in the CEE region in their activity and potential expansion. Companies more frequently reported this barrier as being a concern, than the uncertainty surrounding demand for their products and services, according to Eurostat’s business surveys. It can therefore be concluded that economic acceleration is not the only factor affecting the liquidity of the region’s business sector.

For 2018 and 2019, Coface forecasts continued increases in the number of regional insolvencies. This confirms the end of an economic cycle in Central and Eastern Europe. 2018 will see the average number of insolvencies rise by +10.4%, with more countries recording an increase in proceedings. Poland is expected to record a hike of +20.2% in business insolvencies and restructuration proceedings. Serbia and Slovakia, on the other hand, will experience a contraction in insolvencies. Weaker economic growth will be a contributing factor to CEE average insolvencies expanding by +15.5% in 2019.