China in 2014: stable growth with risks of financing and overcapacities

2014 is a year of divergence for the Chinese economy, representing the diverging trends of macro and micro environments. While there are expectations on many reforms in the Chinese economy after the Third Plenary Session of the 18th Communist Party of China Central Committee (CPCCC), the potential negative impacts on the real economy as a result of the reform effort and credit risks associated with the rising cost of fund have to be watched out for.

The real GDP growth of China in 2014 will remain stable but mildly slowing to 7.2% YoY, partly due to higher inflation. The lower government GDP growth target for 2014 is representative of the government’s intention to accelerate reform efforts. Export and investment are expected to improve in light of global recovery.

Acceleration of urbanization and better local government debt (LGD) management were two key themes coming out from the communique from the Central Economic Work Conference. It is expected that the government will address on encouraging infrastructure investments – particularly on building “networks of cities” in the mid-western and north-eastern regions – by the private sector. As the government already indicated that monetary policy will remain stable, the funding of these projects will come from the private sector.

Rising cost of fund is an aspect we have to watch out for in 2014. With the lending rate liberalization introduced in July 2013, banks’ lending would become more market-based and tightness in the interbank market would translate into higher lending rates. Liquidity could become even tighter as many corporate bonds and local government debt will be required to fulfil their repayment obligations in 2014. Weighted-average lending rate in China has already been picking up slowly in 2013, and such trend should extend to 2014 given the market conditions. (appendix 1) It should be even more worrying for small and medium enterprises (SMEs) that, traditionally, did not receive abundant credit facilities from banks.

Steel and Coal :  risks remain as amid government’s effort to ease overcapacity

Highlighted by the government’s advocated effort to tackle overcapacity issues, smaller and inefficient participants in these industries will be facing pressure on rising costs and policy uncertainties.

Steel : Utilization rate of the steel industry remained low in 2013. Moreover, the liability/equity ratio of the large and medium steel mills has been staying at around the peak level (i.e. 231%) as of November 2013. Such ratio shows that steel mills are now operating under higher leverage. With profit margins staying at the current level and it is difficult to generate cash flow, we can also generalize that a rise of such ratio is implying that these companies are at a higher risk of insolvency and non-payment.

Coal : Risk of coal demand is on the downside, with magnitude of the capacity ousting and new environment standards in various industries still being put together. With the abundance of supply – both locally and internationally – and relatively flat in demand coming from the steel and cement sector, the growth momentum may not be sustainable and pricing of coal should be relatively flat in 2014 and beyond.

Auto, Retail and Electronics : moderate to medium risk as demand are strong

Automotive : The implementation of measures to control the number of cars in various major cities in China should neutralize the government’s support of greener vehicles.  Potential negative shocks on Japanese automakers could be seen should the Sino-Japan relationship intensifies. This would, however, not hurt the overall demand as drastically as the demand of Japanese automobiles.

Retail : This sector continues to perform well in terms of credit risk, but outlook is clouded by various factors, including the government’s effort to tackle corruption, slowing income and capital expenditure growth, the existence of import duties and VAT, and RMB appreciation that drive consumption abroad.

Electronics and IT : While domestic demand remained fairly healthy, mid-tier domestic appliances still experienced recessionary pressure in 2013 from their export markets, most notably in Europe and the US. These appliances could see pick-up in demand in 2014 as these regions are expected to see economic recovery. 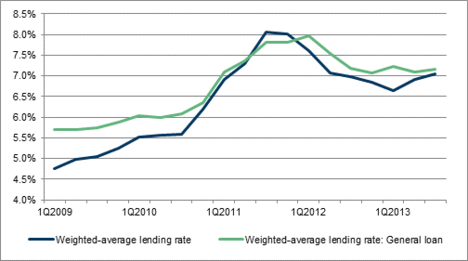 Download this press release : China in 2014: stable growth with risks of financing and overcapacitie... (382.71 kB)