Companies in Central and Eastern Europe have experienced turbulent times over the last few years. Economies were challenged by the contraction of private consumption, due to rising unemployment and the ongoing deleveraging process. They were also affected by the double dip recession of their main trading partner, the Eurozone. 2014 was a year of improvement for most CEE economies. The average pace of GDP growth increased from 1.3% in 2013, to 2.5% in 2014. The engine of economic growth was fuelled by internal demand. This is especially visible in the case of household consumption, which is benefitting from lower unemployment rates, rising wages and improved consumer confidence. Low inflation, or even deflation, has reached many economies in the region. This has mainly been caused by external factors, such as lower commodity prices. The improved economic perspectives led to a stabilisation in the number of insolvencies, with a modest decrease of -0.5% in 2014 (compared to +7% in 2013).

“In spite of a minor improvement, there are still a sizeable number of insolvencies, with over 65,000 companies declared insolvent last year. Improving domestic consumption was not a sufficient-enough factor to return insolvencies to their pre-crisis levels. With forecast GDP growth of 2.7%, we are positive that the downward trend in insolvencies will continue in 2015. Nevertheless, it will take time until companies can fully benefit from the economic recovery”, explains Grzegorz Sielewicz, Coface Economist for Central Europe.

Multifaceted CEE: positive and negative signs within the region

In line with the economic picture, insolvency dynamics vary within CEE economies. Strong rises in insolvencies were recorded in Slovenia and Hungary. Although Slovenia showed a solid GDP growth rate of 2.5% in 2014, its companies did not experience visible business improvements. Its insolvencies grew by +44.7%, the highest level in the entire CEE region. Inadequate investment decisions, lack of adjustment to current economic conditions and the high indebtedness of companies were the most frequently quoted reasons for entities becoming insolvent. In Hungary, the changing legal environment contributed to the high increase in insolvencies, which jumped by +29.4% in 2014.

Company insolvencies in the CEE region will continue to see an improving trend. Coface forecasts that the average number of insolvencies will decrease by -6% at year-end. Household consumption will remain the main driving force behind most CEE economies. As a consequence, prospects should be better for sectors dependent on consumer demand.

In terms of exports, the Russian embargo implemented last year was a strong negative factor, especially for the agro-food sector. However, it did encourage CEE companies to look for alternative markets and to address growing local demand. CEE economies are benefitting from higher volumes of foreign trade to the Eurozone, as many Western European countries enjoy clearer signs of recovery. 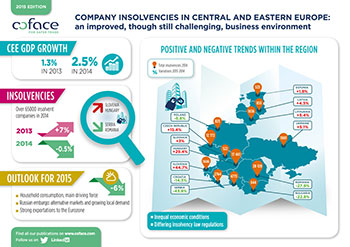 
Our Panorama: Insolvencies in Central and Eastern Europe