Latin America: what life after the commodity burst?

Growth in Latin America has been slowing down since 2011. This lacklustre situation, caused by weak domestic fundamentals, has been exacerbated by cyclical factors experienced since the second half of 2014. In 2015 we have ob-served a further deterioration of this downwards trend, with regional GDP ex-pected to contract by 0.2%. It will be the first recession since 2009, when activi-ty shrunk by 1.4% due to the subprime crisis.

In this study, we will focus on the three Latin American countries of Argentina, Colombia and Ecuador. Argentina will hold presidential elections in October and is expected to breakeven in 2015. Colombia showed strong performance in 2014 but has been losing momentum due to the effects of lower oil prices. Ecuador’s economy is also continuing to be heavily affected by the low level of oil prices.

The second part of the Panorama sets out the latest updates to our Latin America sector barometer. This section reviews the financial performance of companies in different industries, highlighting where risks have increased and where they remain stable. The third section presents an overview of sensitive industries in Argentina and Colombia.

Almost all major economies should decelerate in 2015.

The main negative contribution will come from countries of the Atlantic, Coface expects Brazil to contract to contract by 2.5% and Venezuela by 7% in 2015. 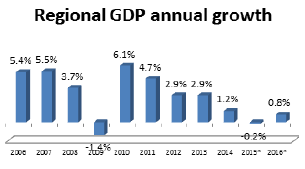 Chile and Peru are the only two main econo-mies, which should report a slight improve-ment this year, however considering a strong slowdown reported in 2014. In 2016 growth will come out the negative territory to a mea-ger 0.8% high. Generally external fundamen-tals will continue to weight negatively on Latin America. The relatively improvement in growth in 2016 should come from a lower recession expected for Brazil in 2016.

The deterioration in economic activity negatively impacted the region’s currencies.

This movement was reinforced by the recent strengthening of the US dollar, which can be explained by the perception among inves-tors that the US economy will outperform other economies over the coming months, and by the expected tightening of US mone-tary policy. 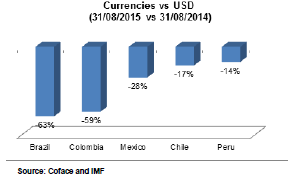 Most sectors in Latin America are now classified as high risk.

In Latin America, risks have generally increased in recent months, against the backdrop of lower commodity prices and their subsequent effects on activity. Most sectors are now classified as high risk. 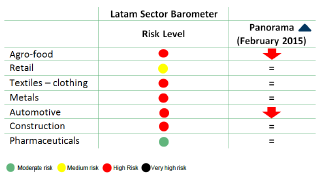 The five main economies are Brazil, Mexico, Argentina, Colombia and Chile. Together they represent 83 % of the region’s GDP. Within the context of lower regional GDP growth, many sectors reported deterioration in their risk perception. This section of the Panorama examines the outlook for each segment.

This edition also focuses on Colombia’s retail industry, which has been slowing due to weaker economic activity, and Argentina’s agro-food sector, which has been negatively impacted by the government’s strong interventionism. 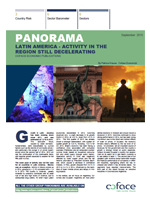 Download this press release : Latin America: what life after the commodity burst? (357.98 kB)