According to the survey of credit risks management in Asia Pacific by Coface, corporate payment experience in the region generally stabilised. Companies in Australia and China suffered more non-payment. The growth slowdown in China remains a concern for other economies in the region in 2014.

According to the survey, roughly 68% of the companies told us that they have faced overdue situation in 2013 (compared to 67% in 2012). Overdue situation has moved slightly toward the long-end with 14% of respondents reported their average overdue days more than 90 days, a slight increase of 1 % compared to 2012.

In our experience, companies with more than 2% of long overdue accounts against turnover could have liquidity problem and have high risk of non-payment to their suppliers. While only 30% of the respondents shared that long-term overdue (i.e. at least 180-days) has weighted more than 2% of their annual turnover in 2013, signalling an improvement compared to the 37% respondents in 2012. Such results point to a stabilized corporate payment experience in Asia in 2013. 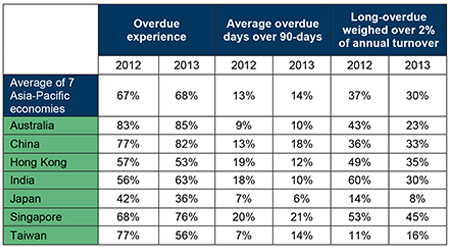 Australia : External demand to be hindered by the weaker demand from China

For the Australian economy, we saw from the survey result that overdue situation did happen to more survey respondents. 85% of the respondents reported overdue and such overdue situations did tend to last longer comparing to a year ago. Such view was well-supported by the findings as shown by the construction sector in Australia. With weakening resources demand growth from China – the biggest export destination accounting for 30% of total exports – and the sustained high savings rate and lackluster investment sentiment, there are certain challenges to the Australian economy ahead.

China : Reform in the making

Economic growth of the Chinese economy has slowed and is expected to further decline to 7.2% YoY in 2014 – compared to 7.7% in 2013 and 7.4% in 1Q2014. Yet, the Chinese government is using fiscal and monetary tools to ensure that growth would not derail too much from the growth trend. With the recently announced RRR cut for rural financial institutions and the supportive policy on clean-energy investment, an above-7% GDP growth will be materialized. In 2013, 82% of the respondents reported overdue. The worsened corporate credit payment experience – especially so for the electronics sector – remains as a major concern and is expected to continue to spook business sentiment in 2014.

Economic activities in Hong Kong are expected to remain stable for 2014. The overall corporate payment experience, as suggested by the payment survey, shows improvement in 2013 and such trend is confirmed by the textile-clothing industry, which should continue to see support coming from external demand growth due to the much-anticipated economic recovery in the US and selected European economies. Domestic drivers – consumption and investment – will be stable but should not see aggressive growth, due to the high base effect as well as the anti-corruption scheme in China that would cut luxury consumption by Chinese tourists.

India was the headline story in 2013 due to the rapid depreciation of rupee and the stubbornly high inflation, but the worst should be behind us. Suggested by the payment survey, companies in India have, in fact, faced slightly improved corporate payment situation in 2013 comparing to a year ago, while overdue situation happened to a higher percentage of survey respondents. Nevertheless, according to results from the payment survey, companies in the IT/ISP and data processing sector did, however, see some improvement in payment experience. As for 2014, India catches the world’s attention with its 9-phase general election. The victory of Bharatiya Janata Party (BJP) and its leader Narendra Modi, the country’s next Prime Minister who is known to be pro-business and market friendly, raised market expectation on industrial and social reform, even though it may take some time. Nevertheless, reducing the budget deficit is still a challenge for the country.

Prime Minister Shinzo Abe’s economic recovery plan in Japanese has gained popularity both domestically and internationally. Such effect has, perhaps, improved the corporate payment experience in the country as observed by the result, with obvious decline in occurrence, length, and weight of long-overdue recorded. Yet, with the first two arrows (fiscal and monetary stimuli) of Abenomics being shot and received positive knee-jerk reactions, the third arrow (structural reform) is longed for and would be needed for further optimism.

“The recent consumption tax hike in Japan – first since 1997, and it brings consumption tax from 5% to 8% – is expected to push inflation up by 2.86%, with other things being equal. While worries are casted over such tax hike and a repeat of 1997-situation would come, such worst-case scenario is rather unlikely due to the supportive fiscal and monetary stances, higher household expenditure, and the 2020 Olympics. FMCG sector – which saw good payment experience, both in absolute and relative term – should benefit from growth in their downstream customers (i.e. the retail sector).” said Rocky Tung, economist for the Asia Pacific Region of Coface.

Singapore’s economy is expected to see growth pickup in 2014, due to various factors. Higher consumption supported by the strength of tourism, external demand recovery from developed markets, stabilized housing market, and the stronger manufacturing momentum will be supportive of the economy’s growth. With such improvement, it remains hopeful that the payment experience of Singaporean corporates will see improvement in 2014, while 2013’s situation was largely similar to the 2012 situation.

The Taiwanese economy is expected to see moderate growth in 2014, supported by the strength of tourism and external demand recovery from the developed markets. Internal demand, particularly consumption, will remain sluggish due to the lacklustre wage growth situation across all sectors. Suggested by the payment survey, although overdue situation has become less common among Taiwanese corporates in 2013, the overdue period tended to go longer comparing to a year ago and more respondents showed us that long-term overdue weighted more than 2% of the annual turnover.

“Comparing to the general economy, the electronics sector in Taiwan may be facing even more pressure going forward – particularly in the medium-term – and it is essential for businesses to find its positioning. More pressure is set to come from the fact that China is moving up the value chain. With absolute disadvantage against China on labor cost, it is hard to imagine Taiwan to boost the manufacturing sector for the electronics sector – which has been the case since 2009. Moreover, as high value-added downstream process (e.g. post-sales services) would usually require proximity to market, the Taiwanese sector would lose out to the peers in China, Japan and Korea, where population is significantly larger.” said Rocky Tung.

2014 Outlook: the threat of a slow growth in China looms over the region

From the hawk’s-eye view, Asia’s economic growth momentum remained strong in the post-crisis era, with Coface’s forecast pointing to a 6.1% for 2014.  Such momentum partly came from the dividend from economic bloom of the 2 biggest emerging markets – China and India – during the past decade; however, with growth outlook of these two countries notably lower than the long-term growth trend (China averaged 10.6% and India averaged 7.8% between 2000 and 2011).

The upturn in the advanced economies (1.9% forecast for 2014, after 1.2% in 2013) mainly US and European markets will benefit to export oriented economies in Asia like Hong Kong, Taiwan and Singapore. However, the decelerated growth of China expected at 7.2% in 2014 could impact most of the economies in Asia which have been relying on demand of China.

This survey was conducted in the 4th quarter of 2013 with responses from 2,373 companies of all sizes and industries in Australia, China, Hong Kong, India, Japan, Singapore and Taiwan. This survey aimed at providing a broad understanding of the status of payment experiences, payment trends and credit risk management practices in companies in the Asia Pacific Region.