Panorama : An economic upturn in the face of uncertainty

Starting with falling oil prices and financial markets in the winter, the Brexit referendum in the summer and the election of Donald Trump in the autumn, 2016 was punctuated by a series of upsets. Can we hope for more calm – or even improvements in 2017?

Although the end of 2016 was marked by the upsets in the US, with the unexpected outcome of the US presidential elections and the Fed’s long-awaited raising of key lending rates, neither of these events triggered a collapse in the financial markets. In emerging economies, there has even been a detectable uplift in recent months – but can this last?

The fog of uncertainty dominating the economic sphere is unlikely to lift in 2017. The forecasts on the repercussions of the events of 2016 remain unclear. Among these uncertainties are (i) the as yet unknown and unpredictable policies of Donald Trump, both internally and in terms of spillovers (such as the impact on Mexico, where activity is already slowing, with a lowering of Coface’s assessment to B); (ii) the lack of visibility on the future of the United Kingdom, where the terms of its exit from the European Union are yet to be defined; and (iii) the dominance of political risks linked to upcoming elections1 (namely in the Netherlands, France and Germany). In addition to these undetermined risks, are “conventional” hazards, such as concerns over the slowing and rebalancing of economic activity in China and questions on how quickly the prices of raw material will rise. One new factor, however, will be the expected return of inflation, if only as a mechanical reaction from the reaching of the lowest point for raw materials prices in 2016, and even though domestic demand remains relatively restrained.

Despite these risks a number of countries (such as Spain which has been upgraded to A3) are back on track. In Central Europe, Estonia, Bulgaria, Serbia and Hungary are continuing to see their risk assessments improving. In Africa, Ghana (upgraded to B) and Kenya (to A4) are looking more positive, while there are continuing rays of hope for Brazil and Russia. Other countries have adopted good resolutions for the new year. Clearly, voluntary and often painful adjustments will need to be made, but the outlook for the medium term looks much sunnier. Following a difficult year, Argentina, looks likely to start harvesting the fruits of its labours (hence the raising of its assessment to B). Subsequent to a devaluation of its currency and the receipt of an IMF loan, Egyptian companies are expected to see an easing of payment problems, even though a slowdown in growth is anticipated. Turkey, however, remains on watch, as does South Africa, (which has been downgraded to C). Finally, this is the first time since June 2015 that Coface has upgraded more assessments than downgraded.

Download the publication "An economic upturn in the face of uncertainty"

DOWNLOAD THE INFOGRAFIC : AN ECONOMIC UPTURN IN THE FACE OF POLITICAL RISK 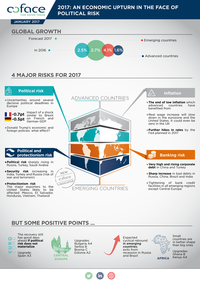 Download this publication : Panorama : An economic upturn in the face of uncertainty (1.18 MB)